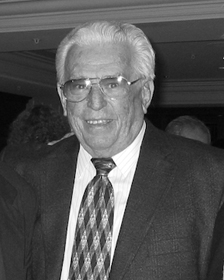 British Columbia’s first perfusionist and Chief, John Basaraba, passed away April 20th, 2013. He was 86.
John started at the Vancouver General Hospital in 1955 and retired from perfusion in 1984. I had always figured that someone would have heard about his passing, and a contingent of the old guard would march down to the funeral hall to pay our respects.  Alas, that was not to be, he slipped away without anyone from old VGH noticing; the place where he had contributed a lifetime of dedicated service.
John’s legacy lives on in simple things like the Basaraba tubing holder, still in use today. But his legacy runs deeper and much richer than that, these old open–heart gentlemen were true pioneers. John, a “tank boy” (RT) back in the ‘50’s got his start in open–heart by making the mistake of showing some interest in the barking dogs from the animal lab.  He was grabbed by anesthesiologist Bill Dodds and told to: work this lever, keep that red and by all means watch that.  Perfusion equipment back in the day was handmade from a poor pencil sketch of some contraption a young–buck surgeon had seen at some far off place, like the Mayo or Cleveland Clinics.  You were truly alone then, if you needed help or advice you couldn’t text a colleague in Sweden, or use a cell phone to call someone in Toronto.  You had to wait for a letter, which might take up to a month, and that's only if you knew who to write to.  An appropriate venous saturation was the same colour of a box of No. 7’s cigarettes, the chosen smoke of all pump boys.  Alas, BC had no pump girls at that time.  There were no bubble or level detectors to hold your hand, and in fact, no alarms of any kind.  Tubing kits didn’t spring from a box onto the pump fully setup.  No, these were hand cut, mounted on metal connectors, sterilized on site, and used over and over again.  Oxygenators were made of glass, metal and bottles of antifoam.
To raise funds to purchase VGH’s first heart pump, a Sigma pump, an illegal bingo game was held, and later was busted by the cops.  With the surgeons making a fast escape out the back door, John was left holding the bag so to speak.  The next day, the surgeons Trapp, Allen, and Ashmore bailed him out before John’s wife had even taken notice. That experience was kept secret from her for decades.  Being a salt of the earth kinda guy, John’s favourite teaching line was “you don't really need to know that.”  For the most part he was right, keep the pump turning, the blood red, and For Christ’s Sake, don’t pump any air!
Many first generation perfusionists visited VGH and John for experience. Some were Peter Fortini, who set up shop in Calgary, Denis Nugent in Regina, Marcel Roy from Winnipeg and Ted Flegel who set up BC Children’s program.  Others who later worked under him were Brian McCloskey from the Foothill’s, Harry Mickelson at St. Paul’s Hospital, and Arnold Benak and Pierre Laboisiere both in Seattle.  Many an eastern sales rep ventured out to the wet coast to see John and ply their wares.  The ones of European decent fared better than some hardcore Torontonians.  Several times John saw the latter coming, and he would hide behind the pump room door.  Reps eventually found out about this, and lingered just a bit longer, to make their point.
When John retired, over 300 staff, dignitaries and even patients showed up at his rock star type retirement farewell dinner.  This was a real credit to the man and what he achieved. We still have some memorabilia of John’s; the old Sigma pump, first patient open heart records, disc oxygenators, old photos, and the like.  I think these things occasionally remind us to look back to see where we’ve been, and to appreciate where we are going. The footprint John left is forever imprinted on BC’s, and Canada’s, open heart landscape.
John spent his retirement years travelling with his wife of 64 years, Yvette, who predeceased him by just two months.  He is survived by his son, three daughters, ten grandchildren and three great grand children.
Rest in peace John,
David Nash
Supervisor, Perfusionist Services,
Vancouver General Hospital